Our emotions have a direct influence on our physical wellbeing.

WHAT IS LIGHT IN THE HEART OF DARKNESS?

With The Journey, Brandon Bays developed a simple but profoundly effective approach for healing body and mind that inspired an international bestselling self-help classic. Kevin Billett experienced the healing power of this work when he freed himself from 30 years of depression using Journeywork. He then joined Brandon in developing the work into a worldwide self-healing method. In this compelling and experiential book, the authors unmask some common fallacies about depression, set about redefining it, and show step-by-step how we can uncover and fully heal its real root causes. By distilling important Journey teachings and sharing personal examples they show how we too can discover the innate positivity, fulfillment and joy that lies deep inside us all. Using the comprehensive guided introspections in this book, no matter whether we experience depression or simply feel stressed, anxious or ‘blue’, we can set ourselves free to live fulfilling and meaningful lives, at peace and in alignment with our real purpose. 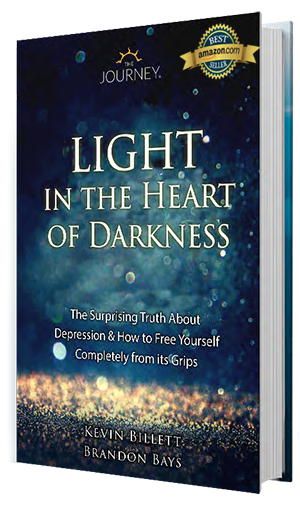 What others say about Kevin.

Freedom from a ‘genetic inevitability’

“I have lived an entire lifetime under the erroneous belief that depression was a genetic inevitability, an inescapable inheritance, one which I would invariably see transmitted to my children. Through various tools of healing and yoga, I managed to largely overcome depression, yet without vigilant adherence to these tools, it still hovered there, threatingly ready to reveal itself and reinstate its territoriality into my life.

After doing the Out of the Blue workshop with Kevin Billett, I managed to identify the roots of this unwanted legacy, and rip it out from the very core. The workshop helps to distinguish the myths from empirical fact, and gives accessible and effective tools to deal with patterns of depression both personally as well as for use as a Journey practitioner with clients.

Kevin is an impeccable teacher, highly astute, as well as wholly accessible for questions and clarification. He has the rare gift of being able to transmit both factual and esoteric truth, is deeply intuitive and exudes in both his teaching and his comportment, the channeling of Grace itself. The workshop evoked for me, a profound healing and catalyzed a deeper state of awareness and stillness. Indeed I journeyed right out of the blue and into the peace that is my own essential nature.”

What You Will Learn?

Who Should Be There?

Take The Journey, not medication, and end your depression forever

The Journey has proven successful, even for those with deep-seated, chronic depression. Kevin Billett is a case in point. He suffered from chronic depression for over 20 years before finding Brandon Bays’The Journey and finally setting himself free. And you can do the same for yourself with Light in the Heart of Darkness.

Easy to master, The Journey is a simple yet profound process. The method Brandon used to heal herself physically also works with emotional issues and states of being, including depression. It involves facing your emotions one by one and releasing stored and hidden cell memories as you go deeper into the heart of who you really are. Light in the Heart of Darkness outlines the exact steps you need to find ultimate freedom from the blues. It shows you how to clear out old issues that have held you in the vice like grip of depression for years. Using your own, infinite wisdom you’ll get to the root cause. You’ll clear out old memories stored in your cells, leaving you completely healed and free to live in unbridled joy, passion and fulfillment.

There Are Seminars – and There’s The Journey

The others seem just like background preparation for The Journey, where the real business gets done.
Massive thanks!
Tom F.
Architect